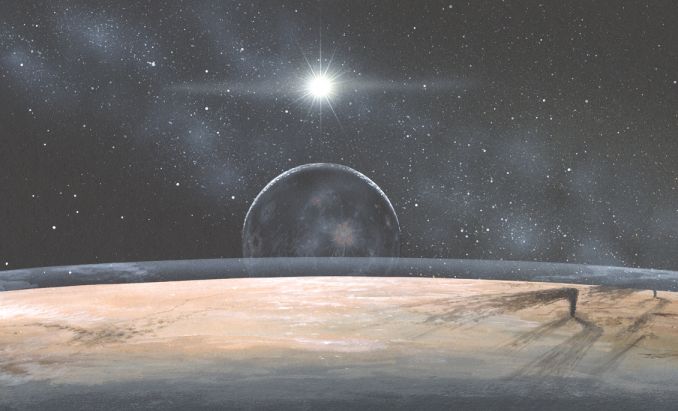 Explanation: Pluto's horizon spans the foreground in this artist's vision, gazing sunward across that distant and not yet explored world. Titled New Horizons, the painting also depicts Pluto's companion, Charon, as a darkened, ghostly apparition with a luminous crescent against a starry background. Beyond Charon, the diminished Sun is immersed in a flattened cloud of zodiacal dust. Here, Pluto's ruddy colors are based on existing astronomical observations while imagined but scientifically tenable details provided by the artist include high atmospheric cirrus and dark plumes from surface vents, in analogy to Neptune's large moon Triton explored by the Voyager 2 spacecraft in 1989. Craters suggest bombardment by Kuiper Belt objects, a newly understood population of outer solar system bodies likely related to the Pluto-Charon system. NASA is now considering a future robotic reconnaissance mission to Pluto-Charon and the Kuiper Belt which could reach the distant worlds late in the next decade.