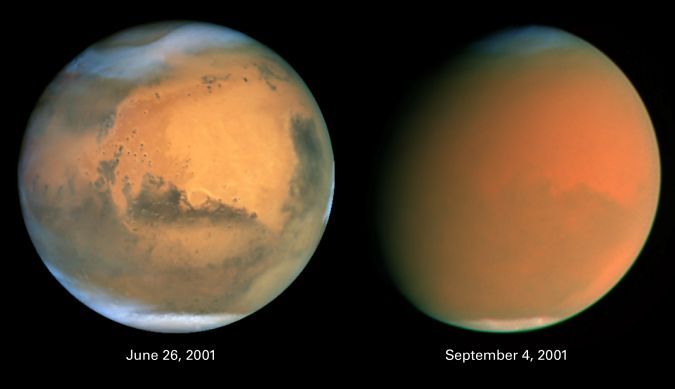 Explanation: For months now, Mars has been engulfed by a great dust storm, the biggest seen raging across the Red Planet in decades. As a result, these two Hubble Space Telescope storm watch images from late June and early September offer dramatically contrasting views of the martian surface. At left, the onset of smaller "seed" storms can be seen near the Hellas basin (lower right edge of Mars) and the northern polar cap. A similar surface view at right, taken over two months later, shows the fully developed extent of the obscuring global dust storm. The storm is reported to be waning, but planet-wide effects such as the warming of the upper martian atmosphere and cooling of the surface are still being monitored daily by instruments on board the Mars Global Surveyor spacecraft. The present condition of the martian atmosphere is also important to the aerobraking Mars Odyssey spacecraft, scheduled to arrive at the Red Planet next week.