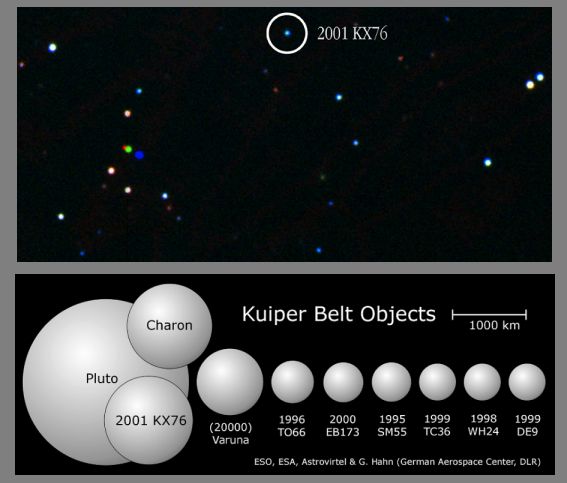 Explanation: Newly discovered minor planet 2001 KX76 is circled in the top panel above, a recent composite image from the European Southern Observatory's 2.2 meter telescope at La Silla, Chile. Though 2001 KX76 appears here as single point of light in an unremarkable star field, its orbit has been accurately measured by Astrovirtel, a newly operational "virtual telescope" capable of mining many years of archival data for previously unrecognized images of 2001 KX76. The results show this minor planet to be very distant, now orbiting just beyond Pluto and Charon in the realm of the Kuiper Belt. At its distance, apparent brightness, and assuming a reasonable surface reflectivity, 2001 KX76 would be 1,200 kilometers or more across -- larger than the largest main-belt asteroid, Ceres. In fact, the illustration in the bottom panel graphically compares this size estimate to Pluto, Charon, and the largest previously known Kuiper Belt objects, indicating the newfound minor planet is second only to Pluto in diameter. Along with other evidence, the comparison suggests that Pluto and Charon are closely related to Kuiper Belt worlds like 2001 KX76.