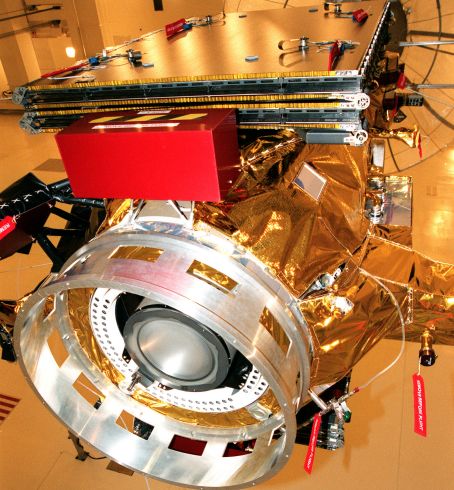 Explanation: At full throttle the Deep Space 1 spacecraft's innovative ion drive produces about 1/50th of a pound of thrust ... a force so great that it would just about hold up a piece of paper on planet Earth! Still, powered by solar arrays ion propulsion systems can run continuously. For long duration space missions they ultimately win out over the powerful but brief blasts of less efficient chemical rockets. Deep Space 1 is seen here suspended in an assembly room, a folded solar array resting above the circular ion propulsion module. Already a successful technology demonstrator with experimental autonomous software, the spacecraft flew by asteroid 9969 Braille in July of 1999. Later that year, in November, the robot probe was nearly lost due to the failure of its wide-field star tracker camera. But engineers were able to reprogram the navigation system to utilize another on-board camera and on 28 June 2000 the ion drive was throttled up. Now, the adventures of Deep Space 1 continue. Again steering by the stars, Deep Space 1 is scheduled to rendezvous with periodic Comet Borrelly today.