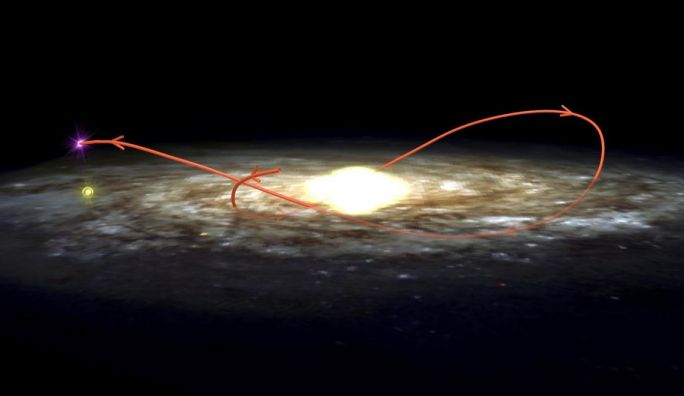 Explanation: Black hole candidate XTE J1118+480 is known to roam the halo of our Milky Way Galaxy. This exotic system - thought to be a stellar mass black hole consuming matter from a companion star - was discovered only last year as a flaring celestial x-ray source. Suggestively termed a microquasar, recent radio and archival optical observations of its motion through the sky have now allowed its orbit to be calculated. Illustrated above, the black hole's present galactic location is indicated by the purple dot, with the Sun's position in yellow. A mere 6,000 light-years from the Sun now, XTE J1118+480's orbit is traced by the orange line, backtracked for some 230 million years into the past based on models of the Galaxy. Astronomers note this black hole's orbit about the galactic center, looping high above and below the Galaxy's plane of gas, dust,and stars, is similar to orbits of globular star clusters, ancient denizens of our Galaxy. It seems likely that XTE J1118+480 too has its origins in the early history and halo of the Milky Way.