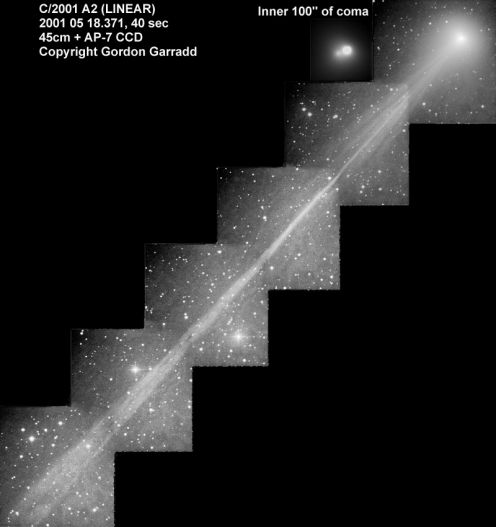 Explanation: Arcing toward southern skies in late March, this faint comet LINEAR - the one officially designated C/2001 A2 (LINEAR) - brightened unexpectedly. The outburst, apparently due to the fragmentation of its nucleus, delighted observers as the comet eventually increased to naked-eye brightness. Comet LINEAR's tail also grew and in this mosaic of images from May 18, astronomer Gordon Garradd has carefully followed the fluorescing filaments of LINEAR's gas tail stretching 1.5 degrees (the width of three full moons) along the anti-sunward direction. The inset close-up near the top clearly shows two bright condensations in the cometary coma, indicating the presence of a split nucleus. This comet LINEAR made its closest approach to the Sun on May 24. Still showing off for southern skygazers at about 5th magnitude, it will become more easily visible for northern observers by late June.