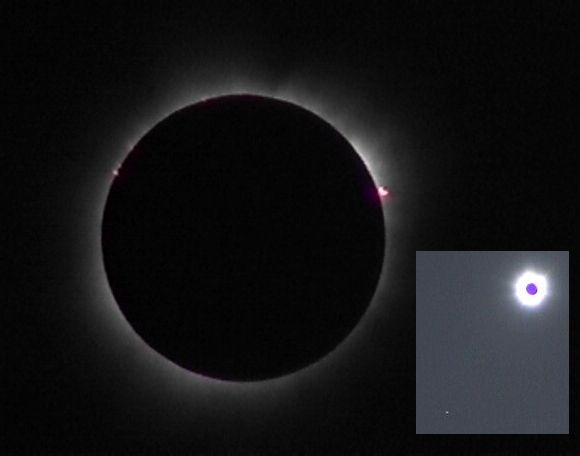 Explanation: Yesterday, for a brief few minutes, a total eclipse of the Sun brought darkness to southern Africa's daytime skies. During this first total solar eclipse of the third millennium webcast sites were swamped, but sun-watchers along the eclipse path enjoyed clear weather and reported fantastic views. Enthusiastic astrophotographer Olivier Staiger recorded these pictures during the eclipse's total phase from Lusaka, Zambia. The large image above shows the Sun's tantalizing inner corona with telltale pinkish prominences around the solar limb, while the inset at the lower right reveals the spiky outer corona. But the inset also captures another celestial beacon sharing the eclipse-darkened heavens, the bright planet Jupiter shining at the lower left. The next total solar eclipse will be on 2002 December 4 ... again in southern African skies.