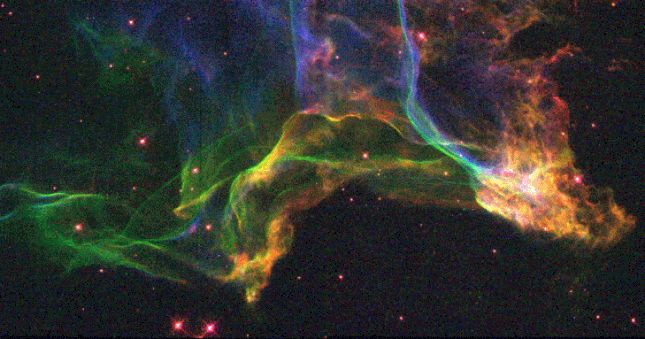 Explanation: The shockwave from a 20,000 year-old supernova explosion in the constellation of Cygnus is still expanding into interstellar space. The collision of this fast moving wall of gas with a stationary cloud has heated it causing it to glow in visible as well as high energy radiation, producing the nebula known as the Cygnus Loop (NGC 6960/95). The nebula is located a mere 1,400 light-years away. The colors used here indicate emission from different kinds of atoms excited by the shock: oxygen-blue, sulfur-red, and hydrogen-green. This picture was taken with the Wide Field and Planetary Camera 2 on board the Hubble Space Telescope.