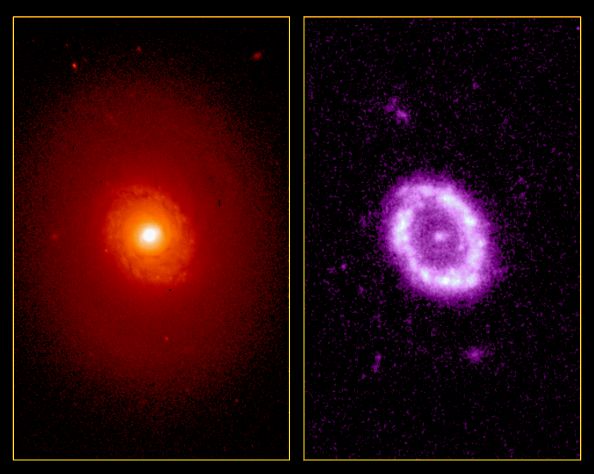 Explanation: Today's galaxy, M94 (NGC 4736), lies 15 million light-years away in the constellation Canes Venatici. In the red light image (left), its very bright nucleus and tightly wound spiral arms seem to slowly fade into a faint outer disk. But when viewed in wavelengths shorter than blue light - ultraviolet (UV) light - its appearance dramatically changes. While the red light image highlights the older, cooler stars of M94, the UV picture (right), from the shuttle-borne Ultraviolet Imaging Telescope, is dominated by clusters of massive, hot stars a mere 10 million years young. These UV bright young star clusters are mostly arranged in a stunning ring nearly 7,000 light-years wide around the galactic nucleus. What controls this star forming activity? Exploring wavelengths beyond the blue, astronomers now have evidence that star forming activity in galaxies like M94 can be orchestrated by the symmetric structure of the galaxies themselves instead of the titanic galaxy-galaxy collisions suspected in yesterday's case of the Cartwheel galaxy.