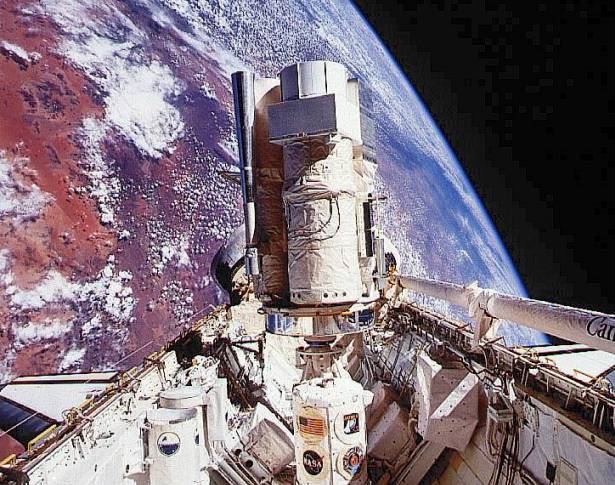 Explanation: Six years ago, a cluster of three ultraviolet telescopes flew into orbit on the Astro-2 mission aboard the space shuttle Endeavour. Seen here perched in Endeavour's payload bay about 350 kilometers above the Australian desert are the Hopkins Ultraviolet Telescope (HUT), the Ultraviolet Imaging Telescope (UIT), and the Wisconsin Ultraviolet Photo-Polarimeter Experiment (WUPPE). HUT is in front of the other instruments with a silver, conical-shaped star tracker at the left of the telescope cluster. The ultraviolet region of the electromagnetic spectrum lies at wavelengths shorter than blue light and can not be seen by human eyes. Almost all ultraviolet light from the cosmos is impossible to detect at the Earth's surface because it is absorbed by atmospheric ozone. But cruising high above the clouds and protective atmosphere, these instruments could explore the universe at wavelengths beyond the blue.