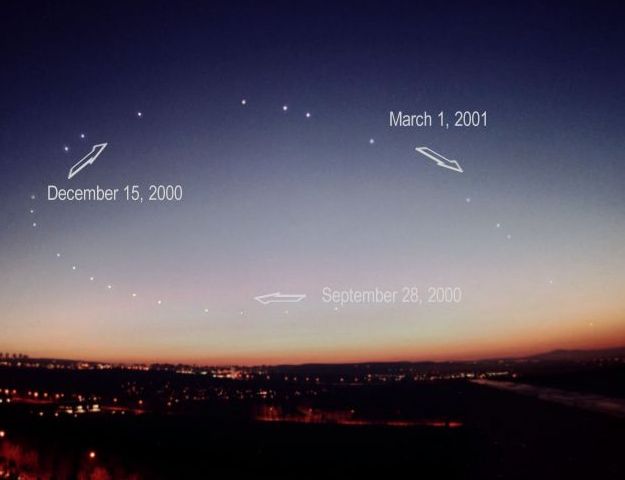 Explanation: From September 2000 through March 2001, astronomer Tunc Tezel patiently photographed the planet Venus on 25 different dates as it wandered through the evening twilight. The pictures were taken from the same spot on the campus of the Middle East Technical University near Ankara, Turkey, and timed so that for each photo the Sun was 7 degrees below the horizon. Carefully registering and combining the pictures, he produced this composite image -- a stunning demonstration of Venus' grand looping sky motion during its recent stint as planet Earth's evening star. As indicated, the first picture, taken September 28, 2000, finds Venus close to the western horizon and drifting south (left) with the passing days. By December however, Venus was climbing well above the horizon after sunset and in January 2001 it reached its maximum apparent distance (elongation) from the Sun. March found Venus falling from the evening sky while moving rapidly north, finally appearing (far right) as a faint dot against the sunset glow on March 24. This month, Venus rises before dawn as the brilliant morning star.