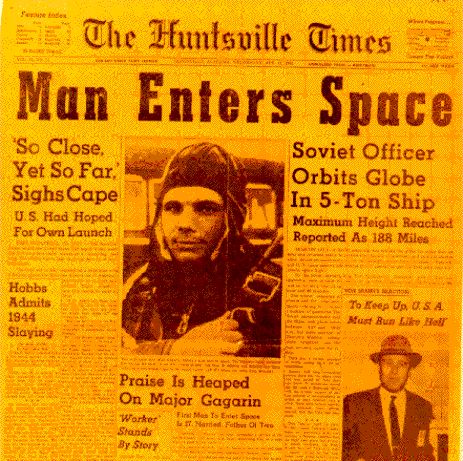 Explanation: Forty years ago, on April 12, 1961, Soviet cosmonaut Yuri Alexseyevich Gagarin became the first human in space. His remotely controlled Vostok 1 spacecraft lofted him to an altitude of 200 miles and carried him once around planet Earth. Gagarin was strictly a passenger on this flight. As a precaution against the unknown physiological effects of spaceflight on piloting skills and judgement, his onboard controls were locked out by a secret combination. In case of emergency he carried the combination in a sealed envelope. After reentry, Gagarin ejected from the Vostok at an altitude of 20,000 feet and parachuted to Earth. How was the first view from space? He reportedly commented, "The sky is very dark; the Earth is bluish. Everything is seen very clearly". Coupled with other accomplishments, this flight confirmed the early Soviet lead in the space race -- the first US astronaut would not be launched until almost a month later and then on a comparatively short suborbital flight. Born on March 9, 1934, Gagarin was an air force jet pilot before being chosen for the first group of cosmonauts in 1960. As a result of his historic flight he became an international hero and legend. Killed when his MIG jet crashed during a training flight on March 27, 1968, Gagarin was given a hero's funeral, his ashes interred in the Kremlin Wall.