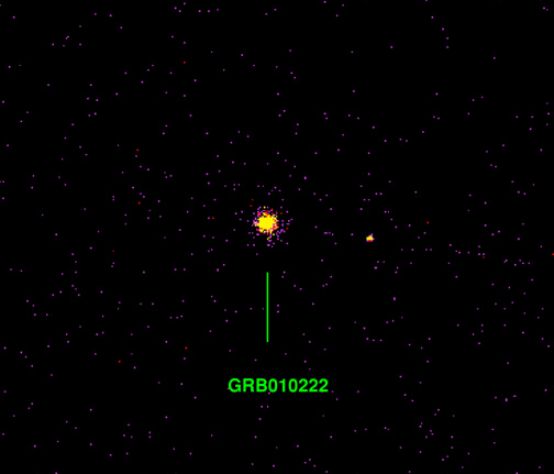 Explanation: A fading afterglow from one of the most powerful explosions in the universe is centered in this false color image from the spacebased Chandra X-ray Observatory. The cosmic explosion, an enormously bright gamma-ray burst (GRB), originated in a galaxy billions of light-years away and was detected by the BeppoSAX satellite on February 22. GRB010222 was visible for only a few seconds at gamma-ray energies, but its afterglow was followed for days by x-ray, optical, infrared and radio instruments. These Chandra observations of the GRB's x-ray glow hours after the initial explosion suggest an expanding fireball of material moving at near light speed has hit a wall of relatively dense gas. While the true nature of gamma-ray bursters remains unknown, the mounting evidence from GRB afterglows does indicate that the cosmic blasts may be hypernovae -- the death explosions of very massive, short-lived stars embedded in active star forming regions. As the hypernova blasts sweep up dense clouds of material in the crowded star forming regions they may also trigger more star formation.