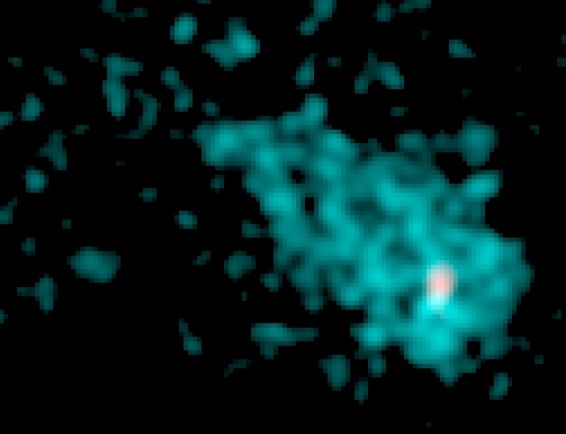 Explanation: Using x-ray data from the orbiting Chandra Observatory along with radio data from the Very Large Array, a team of researchers has discovered evidence for a new example of one of the most bizarre objects known to modern astrophysics -- a neutron star. Embedded within supernova remnant IC443, the suspected neutron star appears as the reddish source at the lower right in this false-color x-ray image. Perhaps 20 kilometers across but with more mass than the Sun, this ultracompact object is the collapsed core of a massive star. The core collapsed when the star, located a reassuring 5,000 light-years away in the constellation Gemini, exploded long ago. How long ago? Judging from the characteristic bow wave shape of the x-ray nebula the researchers have estimated the speed of the neutron star as it plows away from the explosion site. Comparing the speed to the measured distance traveled from the center of IC443, the team, three high school students and a teacher from the North Carolina School for Science and Mathematics, calculated that the light from the supernova explosion arrived at Earth about 30,000 years ago.