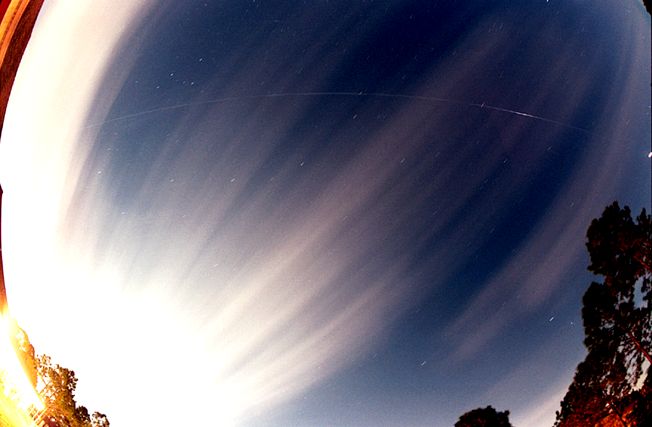 Explanation: Still under construction, the International Space Station is becoming one of the brightest, fastest moving "stars" in the heavens. Despite illuminated clouds and bright light from a nearly full moon (lower left), this 5 minute time exposure easily captures the Space Station's trail as it arcs through early evening skies above Palm Beach Gardens, Florida, USA on December 9. At the time, the Space Shuttle Endeavour had undocked and moved away from the orbiting platform, the shuttle crew having just completed the installation of large solar panels to power the Space Station's systems. Sunlight glinting off the large, shiny panels is likely the source of the brief flare visible along the track. Astrophotographer Doug Murray and colleague report that both Shuttle and Space Station were visible separately and on close inspection of this image they do produce distinct, parallel arcs. At the extreme right hand edge of the picture, the trails pass very near the brightest "star" in the night sky, Venus.