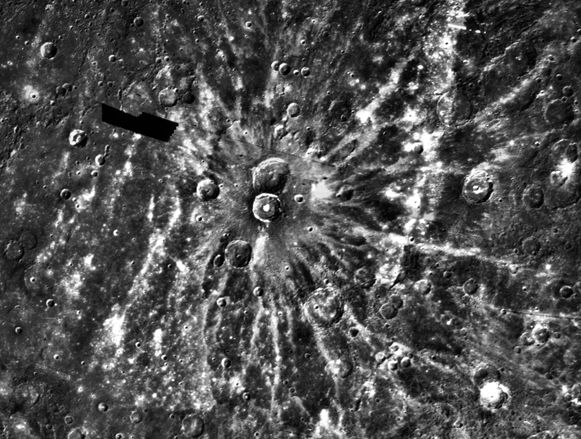 Explanation: Like the Earth's Moon, Mercury is scarred with craters testifying to an intense bombardment during the early history of the Solar System. In 1974, the Mariner 10 spacecraft surveyed this innermost planet up close, producing the only detailed images of its tortured surface. In the above mosaic the bright rays emanating from the 45 kilometer wide Degas crater almost appear to be painted on. The rays consist of light colored material blasted out during the crater's formation. Craters older than Degas are covered by the ray material while younger craters are seen superimposed on the rays. Mercury's gravity and density are about twice that of Earth's Moon so such bright ray craters on the lunar surface tend to be much larger. NASA plans to launch MESSENGER to the least explored terrestrial planet in 2004.