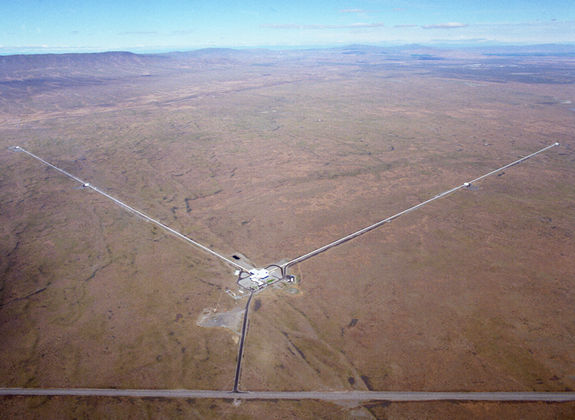 Explanation: Accelerate a charge and you'll get electromagnetic radiation: light. But accelerate any mass and you'll get gravitational radiation. Light is seen all the time, but, so far, a confirmed direct detection of gravitational radiation has yet to be made. When absorbed, gravitational waves (GWs) create a tiny symmetric jiggle similar to squashing a rubber ball and letting go quickly. Separated detectors can be used to discern GWs from everyday bumps. Powerful astronomical GW sources would coincidentally jiggle even detectors on opposite ends of the Earth. Pictured above are the two-kilometer-long arms of one such detector: the LIGO Hanford Observatory in Washington, which recently achieved a phase-lock milestone to future GW detection. When it and its sister interferometer in Louisiana come online in 2002, they may see a GW sky so strange it won't be immediately understood. APOD mourns the recent passing of Joseph Weber, a visionary thinker and pioneer in gravitational wave detection.