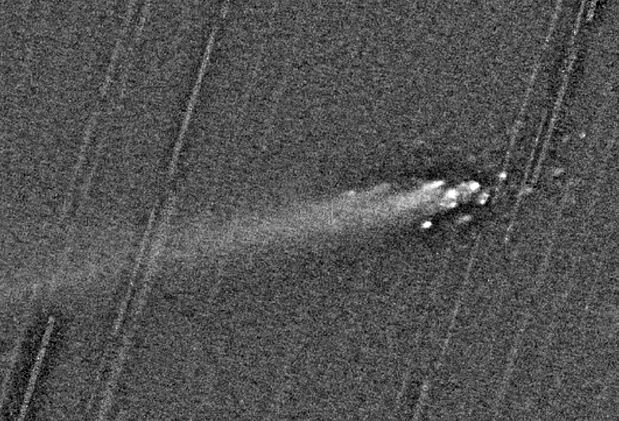 Explanation: What do you call a bunch of comet fragments anyway ... a flock, a covey, a swarm? The question is definitely relevant to comet LINEAR (C/1999 S4 LINEAR) whose nucleus apparently fragmented late last month during its first trip through the inner solar system. This computer enhanced composite image shows faint stars as trails and the remnants of LINEAR's nucleus as a flock of "mini-comets" embedded in a cloud of gas and dust. It was recorded by astronomers using the European Southern Observatory's Antu telescope about a day after the Hubble Space Telescope (HST) was also able to image the covey of condensations. A comparison of the HST and the subsequent Antu images reveals that the swarm of cometary debris has changed markedly in 24 hours demonstrating the very dynamic behavior of comet LINEAR's remains. Astronomers intend to keep watching as comet LINEAR's fragments continue to lose dust and gas and fade from view. As a result, LINEAR's legacy may well be insight into the make-up of a primordial piece of our solar system. If pictures of comet LINEAR have piqued your curiosity about fragments of a comet, why not watch the Perseid meteor shower this weekend?