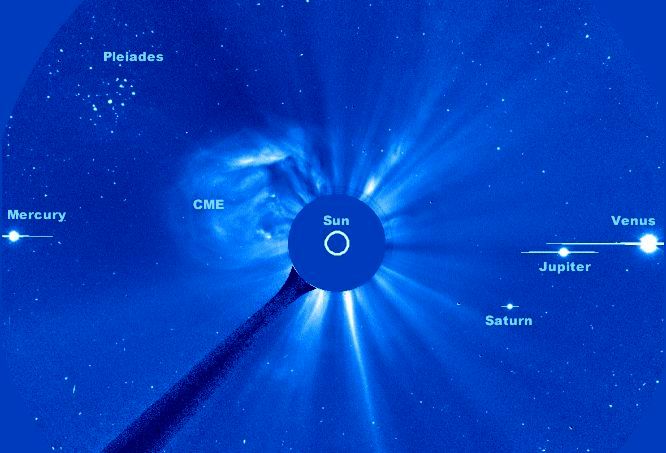 Explanation: Bright stars of the Pleiades, four planets, and erupting solar plasma are all captured in this spectacular image from the space-based SOlar and Heliospheric Observatory (SOHO). In the foreground of the 15 degree wide field of view, a bubble of hot plasma, called a Coronal Mass Ejection (CME), is blasting away from the active Sun whose position and relative size is indicated by the central white circle. Beyond appear four of the five naked-eye planets -- courtesy of the planetary alignment which did not destroy the world! In the background are distant stars and the famous Pleiades star cluster, also easily visible to the unaided eye when it shines in the night sky. Distances for these familiar celestial objects are; the Sun, 150 million kilometers away; Mercury, Venus, Jupiter, and Saturn, about 58, 110, 780, and 1,400 million kilometers beyond the Sun respectively; and the Pleiades star cluster at a mere 3,800 trillion kilometers (400 light-years). SOHO itself orbits 1.5 million kilometers sunward of planet Earth. The image was recorded by the Large Angle and Spectrometric COronagraph (LASCO) instrument on board SOHO on Monday, May 15 at 10:42 UT.