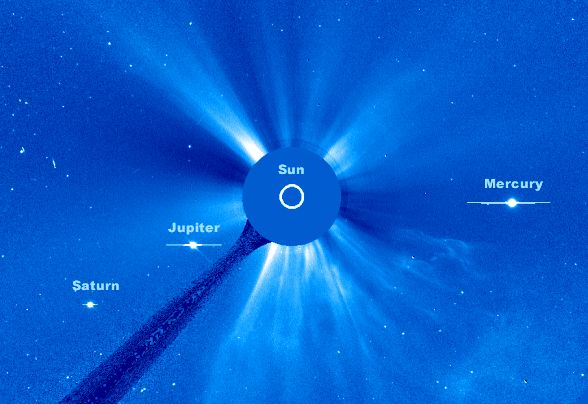 Explanation: Today, all five naked-eye planets (Mercury, Venus, Mars, Jupiter, Saturn) plus the Moon and the Sun will at least approximately line-up. As viewed from planet Earth, they will be clustered within about 26 degrees, the closest alignment for all these celestial bodies since February 1962, when there was a solar eclipse! Such planetary alignments are not dangerous, except of course that the Sun might hurt your eyes when you look at it. So it might be easier to appreciate today's solar system spectacle if you use a space-based coronagraph ... like the LASCO instrument onboard the SOHO observatory. In this recent LASCO image, an occulting disk supported by a structure seen projecting from the lower left blocks out the overwhelming sunlight. It shows three of the planets along with the Sun's location and bright solar wind regions against a background of stars, but Mars and Venus are unfortunately outside LASCO's roughly 15 degree field of view. The horizontal bars through the planets are digital image artifacts. And what about the Moon? The SOHO spacecraft is positioned well beyond lunar orbit where its view of the Sun is never interrupted by the Moon.