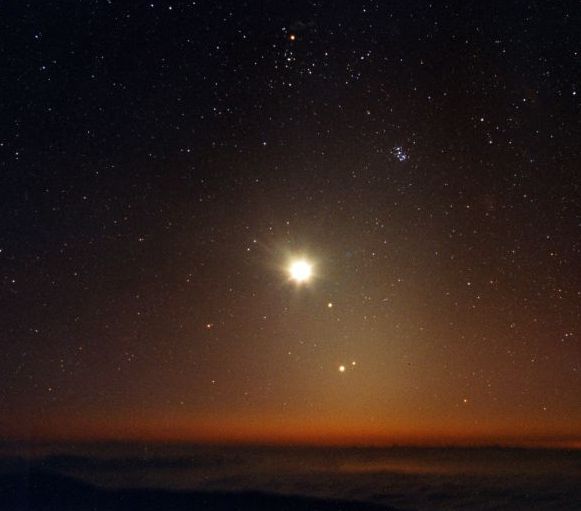 Planets Above The Clouds
Credit & Copyright: B. Magrath

Explanation: Clouds scatter the faint orange rays of the setting sun in the foreground of this breathtaking photograph from the summit of Mauna Kea, Hawaii. Taken on April 7th, this skyscape features a dramatic lunar and planetary alignment. An overexposed crescent moon dominates the celestial scene, but the bright "star" just below and to its right is Saturn while further below Saturn is a close pairing of brilliant Jupiter and a fainter, yellowish Mars. Red giant star Aldebaran is almost directly above the moon near the top of the image and the bright blue stars of the Pleiades cluster are visible about midway up and to the right of the moon-Aldebaran line. The good news is that planetary alignments like this one do not portend disasters, are relatively common, and can clearly make inspirational viewing for casual stargazers and astronomers alike. The bad news is that the world is not going to end because of the highly publicized planetary alignment occurring tomorrow, May 5th -- so you probably will have to go to work!