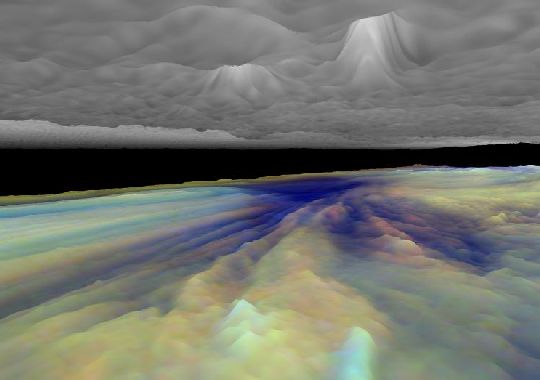 Explanation: Every day is a cloudy day on Jupiter, the Solar System's reigning gas giant. This 3-dimensional visualization presents a simplified model view from between Jovian cloud decks based on imaging and spectral data recorded by the Galileo spacecraft. The separation between the cloud layers and the height variations have been exaggerated. The upper cloud layer is haze a few tens of miles thick. Heights in the lower cloud layers have been color coded; light bluish clouds are high and thin, reddish clouds are low, and white clouds are high and thick. Streaks in the lower layer suggestively lead to a dark blue area, a relatively clear, dry region similar to the site where Galileo's atmospheric probe made the first entry into a gas giant planet's atmosphere on December 7th, 1995.