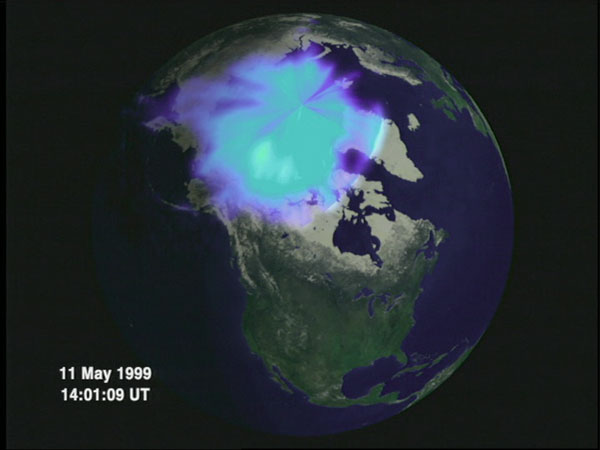 Explanation: On May 10, for some unknown reason, the Solar Wind virtually stopped. Normally our Sun emits a wind of between five and ten energetic particles per cubic centimeter moving outward at about 500 kilometers per second. Late on May 10, however, this gale was reduced to a mere breeze of one particle per every five cubic centimeters. The Sun's Corona was suddenly able to flow out into the Solar System relatively unimpeded, creating beams of energetic electrons. One such beam apparently reached Earth's North Magnetic Pole, and was seen as the unusual X-ray aurora digitally reconstructed in the above false-color image. Our atmosphere absorbed the electrons. This display gave direct evidence, however, that Earth's North Magnetic Pole was connected to the Sun, while the Earth's South Magnetic Pole connected to the distant Solar System. The Solar Wind returned to normal on May 12.