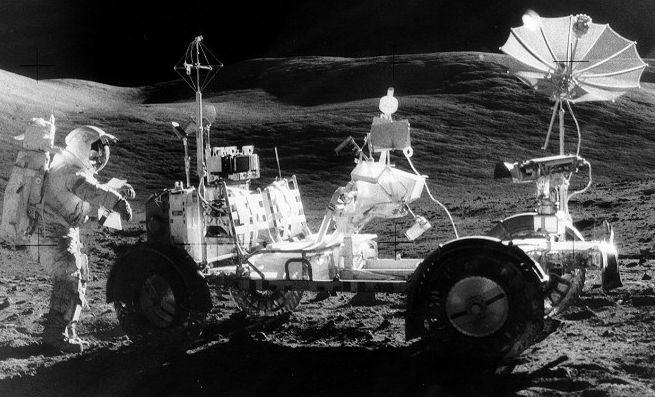 Explanation: In December of 1972, Apollo 17 astronauts Eugene Cernan and Harrison Schmitt spent about 75 hours exploring the Moon's Taurus-Littrow valley while colleague Ronald Evans orbited overhead. Cernan and Schmitt were the last humans to walk or ride on the Moon - aided in their explorations by a Lunar Roving Vehicle. The skeletal-looking lunar rover was just over 10 feet long, 6 feet wide and easily carried astronauts, equipment, and rock samples in the Moon's low gravity (about 1/6 Earth's). In this picture, Cernan stands at the back of the rover which carried the two astronauts in lawn-chair style seats. An umbrella-shaped high gain antenna and TV camera are mounted in the front. Powered by four 1/4 horsepower electric motors, one for each wheel, this rover was driven a total of about 18 miles across the lunar surface. Its estimated top speed was nearly 8 miles per hour.