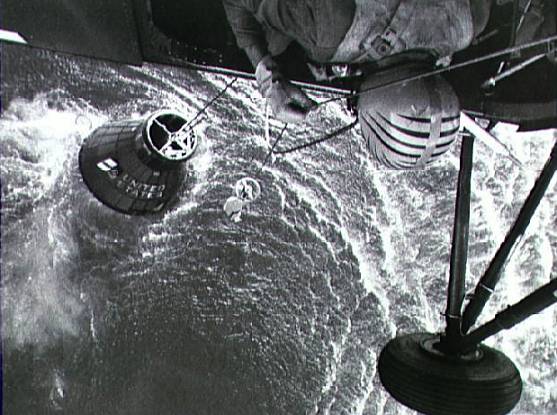 Explanation: Today, the space capsule Liberty Bell 7 rests about 3 miles below the surface of the Atlantic Ocean. But on July 21, 1961, astronaut Virgil I. "Gus" Grissom rode this tiny craft 118 miles above the Earth to become the second American in space. Grissom's flight was suborbital - like fellow Mercury astronaut Alan Shepard's first flight - however his capsule was different, with a window, a new manual spacecraft control system, and an explosive hatch. Unfortunately, after Grissom brought Liberty Bell 7 to a successful splash down in the planned area, the hatch blew prematurely and rough seas began to flood the capsule. While Grissom was able to get out, the military recovery helicopter could not lift the waterlogged spacecraft. This dramatic picture was taken from the helicopter shortly before Liberty Bell 7 was released and sank.