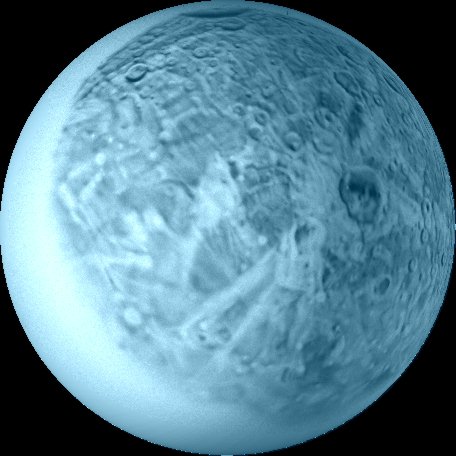 Explanation: What's in a name? Since 1919, the International Astronomical Union has been charged with the task of establishing "conventional" nomenclature for planets, satellites, and surface features. For the remote Uranian system of moons, namesakes from Shakespearean works have been chosen. Thus Oberon, king of the mid-summer night fairies, is also Uranus' most distant and second largest moon. Hamlet is the tragically dark, large and princely crater on its surface (right of center). The above image represents known surface features of Oberon and was constructed by the U.S. Geological Survey (USGS) based on data from NASA's robot explorer Voyager 2. In 1986, Voyager 2 flew through the Uranian system - so far it has been the only spacecraft to do so.