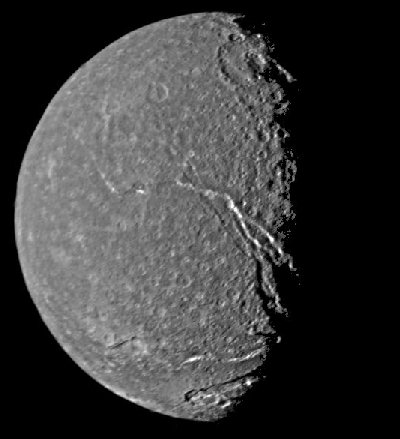 Explanation: British astronomer Sir William Herschel discovered Titania and Oberon in 1787, 210 years ago today. He wasn't reading Shakespeare's A Midsummer Night's Dream though, he was making the first telescopic observations of moons of the planet Uranus (a planet which he himself discovered in 1781). On January 24, 1986 NASA's robot explorer Voyager 2 became the only spacecraft to visit the remote Uranian system. Above is Voyager's highest resolution picture of Titania, Uranus' largest moon - a composite of two images recorded from a distance of 229,000 miles. The icy, rocky world is seen to be covered with impact craters. A prominent system of fault valleys, some nearly 1,000 miles long, are visible as trench-like features near the terminator (shadow line). Deposits of highly reflective material which may represent frost can be seen along the sun-facing valley walls. The large impact crater near the top, known as Gertrude, is about 180 miles across. At the bottom the 60 mile wide fault valley, Belmont Chasma, cuts into crater Ursula. Titania itself is 1,000 miles in diameter.