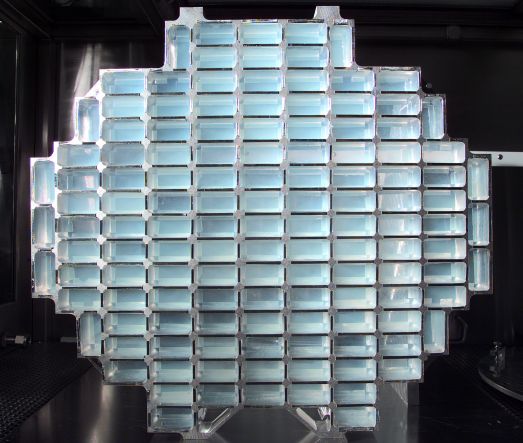 Explanation: On February 7th, this honey comb of aluminum cells filled with aerogel was launched on the STARDUST mission to interplanetary space. STARDUST's goal is to capture dust from a comet's tail and return to planet Earth - the first sample return mission to a comet! This structure represents about 1,000 square centimeters of area for collecting dust trailing within 150 kilometers of the nucleus of P/Wild-2. Comet P/Wild-2 is new to the inner Solar System. Having spent its life in orbit between Jupiter and Uranus, this comet was deflected in 1974 by a close encounter with Jupiter and now orbits between Jupiter and Earth. Dust from P/Wild-2 should impact the aerogel at high speeds and come to rest leaving carrot-shaped tracks in this amazingly tough, transparent, ultra-low density material. Returning to Earth by parachute in 2006, the cometary dust sample will be analyzed for clues to the formation and primordial composition of our Solar System.