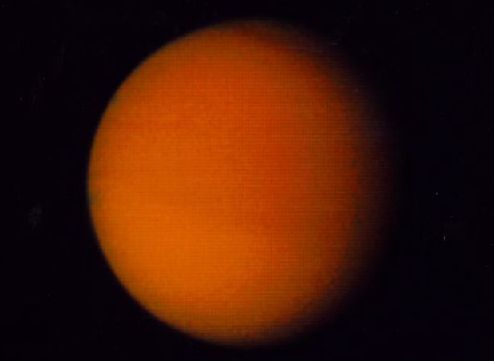 Explanation: The largest moon of Saturn is a rare wonder. Titan is the only one of Saturn's moons with an atmosphere, and one of only two moons in the Solar System with this distinction (Neptune's Triton is the other). Titan's thick cloudy atmosphere is mostly nitrogen, like Earth's, but contains much higher percentages of "smog-like" chemicals such as methane and ethane. The smog may be so thick that it actually rains "gasoline-like" liquids. The organic nature of some of the chemicals found in Titan's atmosphere cause some to speculate that Titan may harbor life! Because of its thick cloud cover, however, Titan's actual surface properties remain mysterious. Voyager 1 flew by in 1980 taking the above picture, and more recently much has been learned from observations by the Hubble Space Telescope. The Cassini mission launched in 1997 will map Titan's surface in 2004, helping to solve some of its mysteries.