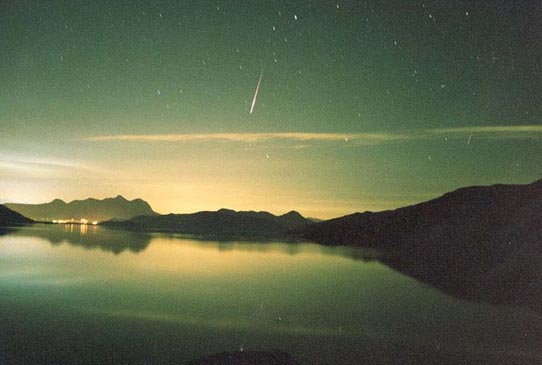 Dawn of the Leonids
Credit: Yan On Sheung

Explanation: Many of the 1998 Leonid shower meteors were so bright they could be seen even during sunrise. The above photograph was taken near the dawn of November 16 close to Hong Kong, China. However, most meteors are fainter and are not associated with any particular meteor shower. On any given night from a dark location it would not be unusual to see up to 10 meteors per hour, while the predictable Meteor showers might feature 100 meteors per hour. A true meteor storm will occur only a few times per century. The actual intensity of meteor storms is notoriously hard to predict, but may feature rates upwards of 10 meteors per second.