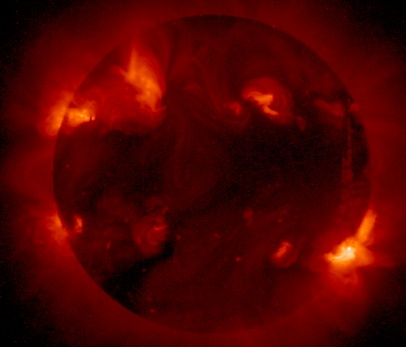 Explanation: The solstice occurs today at 8:56 PM Eastern Standard Time. At the solstice the sun reaches its most southerly position in the sky and winter begins for the Northern Hemisphere while summer starts South of the Equator. This false-color image of the sun was made about 48 hours before the solstice in the light of soft (lower energy) X-rays by a telescope on board the space-based Yohkho solar observatory. The normally bright, visible solar surface or photosphere appears dark in X-ray light while active regions in the solar corona which lie above the photosphere are particularly X-ray bright. Solar photospheric temperatures are about 6,000 degrees C. but the X-ray bright coronal regions have temperatures of millions of degrees. Why is the sun's corona so hot?