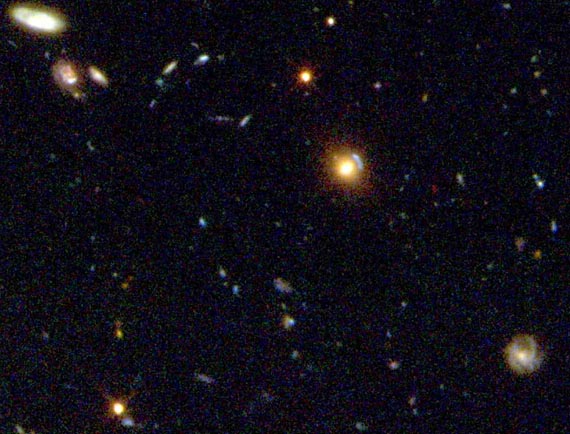 Explanation: Among the faintest objects are some of the most unusual objects. The Hubble Deep Field South was released after much anticipation earlier this month, delivering a unique view of some of the most distant parts of our universe. Part of this field is shown above. Numerous astronomers are currently poring over this field, trying to find clues about young galaxies, cosmological curvature, and dark matter. Clearly, visible among galaxies as dim as magnitude 30 in this long-duration exposure (and in the original Hubble Deep Field North) are many peculiar looking galaxies. One interesting artifact is the blue arc just to the upper right of the large galaxy near the image center. This arc may be light from a more distant galaxy focused by the gravitational lens effect of the nearer galaxy.