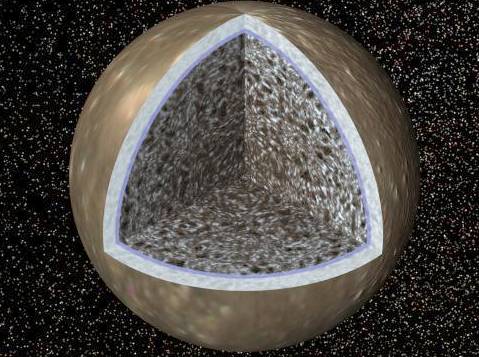 Explanation: Cruising past the moons of reigning gas giant Jupiter, Voyager and Galileo have returned tantalizing evidence for a liquid water ocean beneath the surface of Europa. Now researchers are reporting telltale indications that the battered Jovian moon Callisto may also harbor a subsurface ocean. This cutaway view of Callisto shows a whitish 200 kilometer thick band of ice just beneath the moon's surface. The hypothetical ocean - indicated by the underlying light blue stripe - is potentially a salty layer of liquid water up to 10 kilometers thick, while the rest of the interior is seen as a jumble of rock and ice. Why a salty subsurface ocean? Magnetic measurements made during Galileo flybys so far indicate Callisto's magnetic field is variable, analogous to results during Europa passes, and a plausible explanation is that Callisto too has a subsurface liquid layer. If the liquid were salt water it could easily carry electrical currents and produce the changing magnetic field.