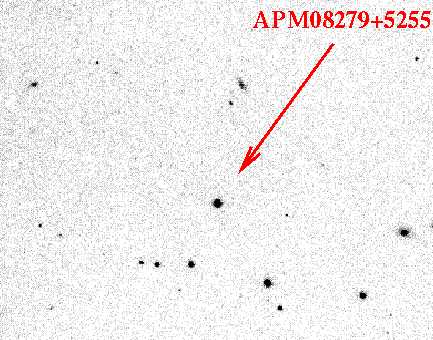 Explanation: It shines with the brightness of 100 billion Suns. Is it a mirage? The recently discovered quasar labeled APM 08279+5255 has set a new record as being the brightest continuously emitting object yet known. APM 08279+5255's great distance, though, makes it only appear as bright as magnitude 15.2, an object which can be seen with a moderate sized telescope. It is the quasar's extreme redshift of 3.87 that places it far across our universe, and implies a truly impressive energy output. One possible explanation of APM 08279+5255's record luminosity is that it is partly a mirage: its light is highly magnified by an intervening galaxy that acts as a gravitational lens. Alternatively, APM 08279+5255 might be the most active known center of an intriguing class of colliding galaxies rich in gas and dust.