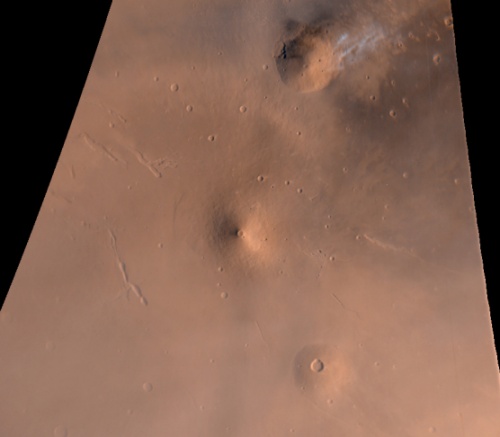 Explanation: This "synthetic color" image swath of the Elysium Volcanic Region of Mars was recorded by Mars Global Surveyor's wide angle camera on July 2. North is up and the sun illuminates the scene from the lower right. Bright clouds hover near the northern most dome-shaped volcano Hecates Tholus. The shield volcano Elysium Mons lies about 250 miles south near the image center, and farther south lies another dome-shaped volcano, Albor Tholus, with a broad summit basin or caldera. Even though Mars is just half the size of planet Earth, it is known for its volcanos - the largest of which dwarf their terrestrial counterparts.