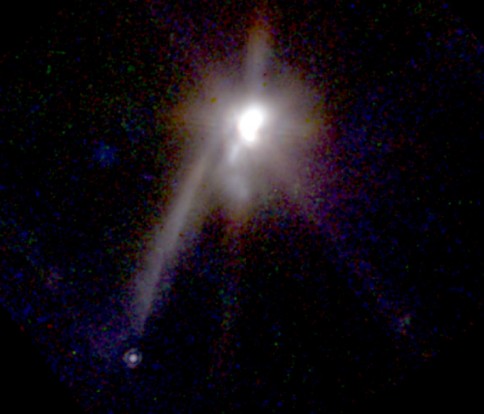 Explanation: This infrared Hubble Space Telescope view may contain the first ever direct image of a planet outside our own solar system. The picture shows a very young double star located about 450 light-years away toward the constellation of Taurus. Cataloged as TMR-1 (Taurus Molecular Ring star 1), the binary system is still embedded in the dust cloud that formed it. This double star and dust cloud are the brightest grouping in the picture, glowing strongly at infrared wavelengths. A filament extends from the binary system toward the lower left and points toward the spot of light representing the candidate planet. Astronomers believe this planet is a "runaway" object which was gravitationally ejected, the filament tracing the path to its present location at about 1500 times the Earth-Sun distance from the parent star system. Models suggest that the planet and binary system are a mere 300,000 years old, with the planet having a mass of about 2 to 3 Jupiters. Future observations to look for the planet's continued runaway motion and spectral signatures should be able to confirm the nature of this object. While this and other tantalizing discoveries of extrasolar planetary objects and protoplanetary disks don't seem to offer direct examples of solar systems like our own, they do strongly hint that planet formation is a varied and common process.