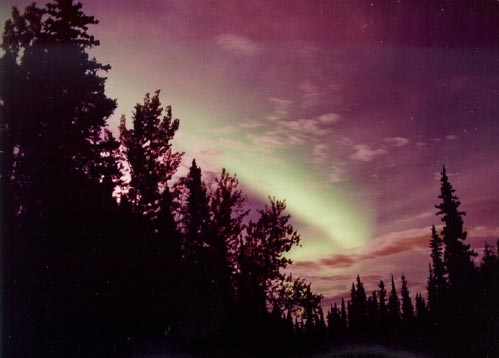 Explanation: What's happening behind those trees? Aurora. This picture was taken at midnight near Fairbanks, Alaska, and captures familiar trees, common clouds, and a glowing sky markedly different than a sunset. Particularly strange is the green auroral ring caused by ionized oxygen high in the Earth's atmosphere. The small water droplets composing clouds reflect and absorb aurora light, giving clouds a reddish tinge. The above picture was taken on September 20th of last year. In the next few years the Sun will reach the most active part of its 11 year cycle, meaning more puffs of high energy solar particles will be released, and more spectacular auroras will occur when these particles strike the Earth.