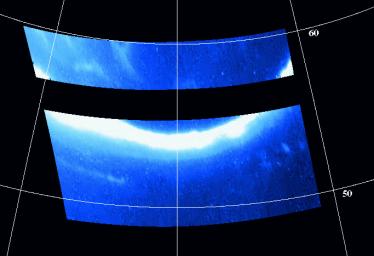 Explanation: Do other planets have aurora? Terrestrial and spacecraft observations have found evidence for aurora on Venus, Mars, Jupiter, Saturn, Uranus, and Neptune. In the above false-color photograph, a good portion of an auroral ring was captured recently in optical light by the Galileo spacecraft in orbit around Jupiter. Auroral rings encircle a planet's magnetic pole, and result from charged particles spiraling down magnetic field lines. Although the surroundings near Jupiter are much different than Earth, the auroral rings appear similar.