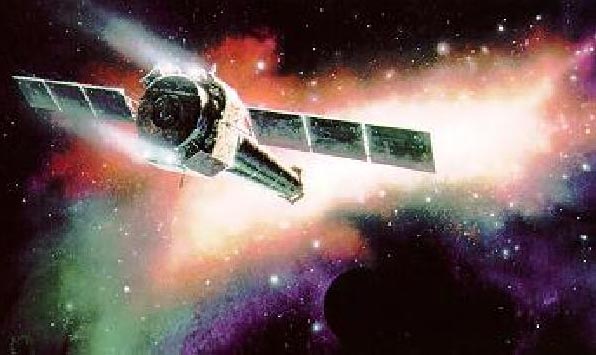 Explanation: Can you name this satellite? In December, NASA's third Great Observatory is planned for launch. The two NASA Great Observatories currently in orbit are the Hubble Space Telescope and the Compton Gamma-Ray Observatory, both now named for famous scientists. But after whom should the Advanced X-ray Astrophysics Facility (AXAF) be named? If your submitted suggestion conforms with contest rules and is chosen, you will have named the most powerful X-ray satellite ever built, and may even win a prize. AXAF is the size of a bus, has strange mirrors polished to atomic smoothness, and will produce X-ray images five times clearer of objects twice as faint as any previous X-ray satellite. This should allow AXAF the ability to see X-rays emitted near small black holes, from distant active galaxies, and inside huge clusters of galaxies. Astronomers now hope for an uneventful launch, routine operations, and spectacular discoveries.