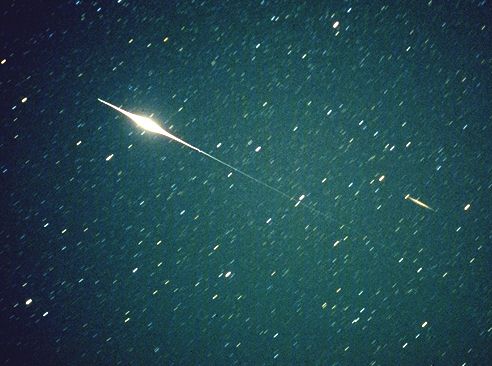 Explanation: Have you seen an Iridium flare? Satellites in low Earth orbit reflect sunlight and are often visible gliding across early evening and predawn skies. But sun glints from Iridium commercial digital communications satellites are providing the most spectacular sightings. This Iridium flare photographed on September 20, 1997 by Belgian amateur astronomer Chris Dorreman reached an impressive -8 magnitude (about as bright as the half illuminated Moon). The one minute long exposure shows star trails nearly perpendicular to the bright, flaring track of the satellite and a "ghost" image of the flare at the far right. Iridium is the 77th element and so was a good name for the originally intended constellation of 77 satellites. Subsequently, plans were scaled down to 66 satellites with about 51 now in orbit and glinting away. Typical flares last 10 to 20 seconds. When can you catch a flare? The brightness, timing, and direction of a flare depend critically on your longitude and latitude, but satellite observers can make accurate predictions days in advance.