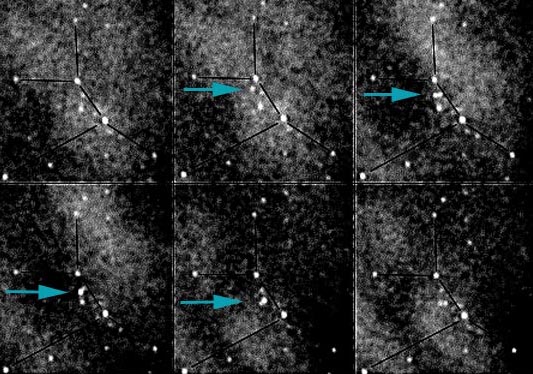 Explanation: Last Thursday an interplanetary spacecraft flew right past the Earth. The above images show sunlight momentarily reflected from this spacecraft's solar panels. No aliens were involved - the Near Earth Asteroid Rendezvous (NEAR) mission actually originated from Earth. Launched in 1996, NEAR zipped past the asteroid 253 Mathilde last June. This Earth flyby gravitationally deflects NEAR onto a trajectory passing the asteroid 433 Eros next year. Above, NEAR appears to move through the constellation of Perseus, as clouds created a changing diffuse white glow. NEAR was only visible for about 2 minutes from San Jose, California, where these image-intensified video camera observations were taken.