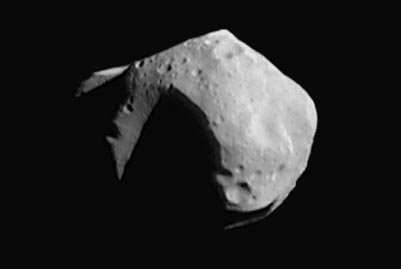 Explanation: Hey Earth, look what I found! On the way to visiting the asteroid 433 Eros in February 1999, the Near Earth Asteroid Rendezvous (NEAR) spacecraft flew right by another asteroid: 253 Mathilde last Friday. Shown above is one picture from the encounter. Mathilde is a large chunk of rock roughly 60 kilometers across that orbits the Sun between Mars and Jupiter in the main asteroid belt. Mathilde's surface is very dark and heavily cratered. The NEAR pictures of Mathilde received so far indicate that the asteroid has undergone spectacular collisions, one of which created the huge impact basin in the center, which is estimated to be about 10 kilometers deep.