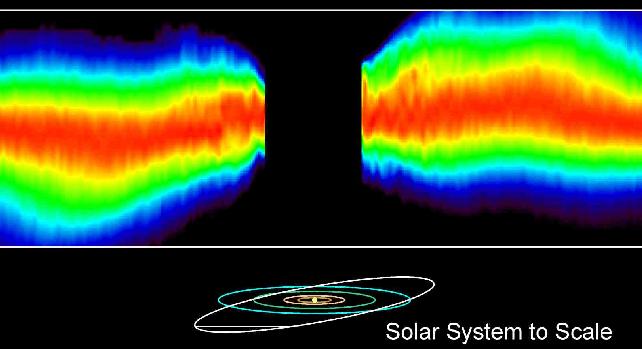 Explanation: What did our Solar System look like as the planets were forming? Since the 1980s, astronomers have been pointing toward Beta Pictoris, a young, sun-like star a mere 50 light-years distant, as a likely example. Beta Pic is surrounded by a disk of dust which we view nearly edge-on. The dust disk shines by reflected starlight and has been examined with ever increasing detail to search for signs of planetary formation. The trick is to follow the disk as close in to the star as possible, without being overwhelmed by the direct starlight. To make this Hubble Space Telescope image, a coronagraph was used to block the direct starlight and achieve the closest view yet. The false color picture shows the inner section of the dusty disk to within nearly 1.5 billion miles of the star itself, about the scale of the orbit of Uranus. The obvious warp is indirect evidence that a planet now orbits this young sun, slightly inclined to the disk. The planet's gravitational pull would produce the visible distortion.