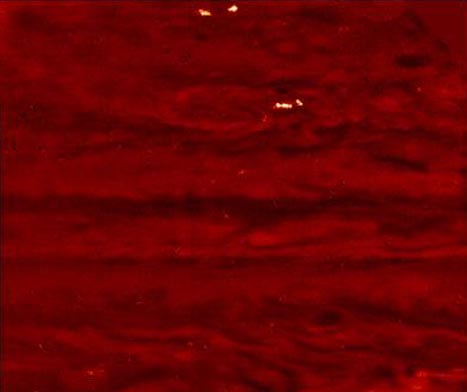 Explanation: Why is there lightning on Jupiter? Lightning is a sudden rush of electrically charged particles from one location to another. To create lightning, charges must first separate inside a cloud. On Earth, drafts of colliding ice and water droplets usually create this charge separation, but what happens on Jupiter? Many astronomers theorize that Jovian lightning is also created in clouds containing water ice. To help investigate this, the above photograph was taken in October by the Galileo spacecraft now orbiting Jupiter. Clouds are dimly lit by sunlight reflected off Jupiter's moon Io. The bright flashes appear to originate in active regions at the level where water clouds would exist, and illuminate an even lower cloud level containing ammonia. One thing is for sure: lightning on Jupiter is a lot brighter than lighting on Earth.