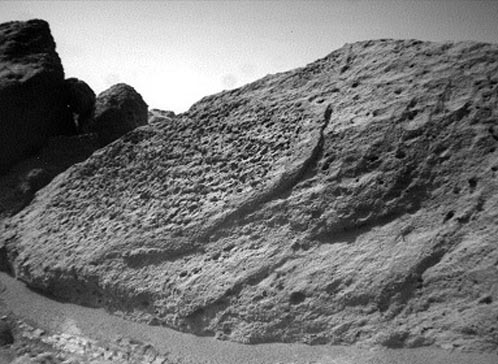 Explanation: Who ordered the Martian pizza? As Mars Pathfinder and its mobile robot Sojourner continue to explore Mars, new and interesting rocks are being discovered, even though the primary mission has been successfully completed. The rock pictured above has been dubbed "Half Dome" and was visited by Sojourner in late August. The shape and fine-scale textures of Half Dome are still being studied. As part of the extended mission, Sojourner has been sent on its longest journey yet - a 50 meter stroll around the Sagan Memorial Station.