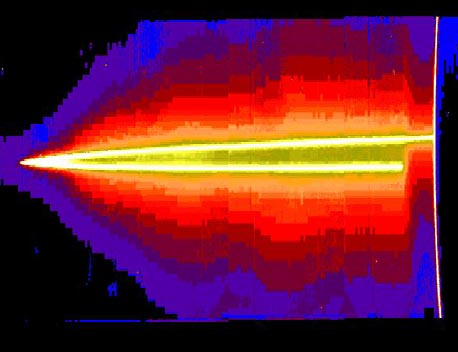 Explanation: Why do small particles hover around Jupiter's rings? These particles form a previously unknown ring halo, recently discovered by the robot spacecraft Galileo currently orbiting Jupiter. Galileo obtained this image when on the far side of Jupiter - from this orientation scattered sunlight makes the halo ring visible. The amount of scattering indicates that halo particles are very small - perhaps 100 times smaller than the width of a human hair. Particles this small are believed to survive only for years, and so must somehow be replenished to Jupiter's ancient ring system. One possible explanation for this unusual halo is that electromagnetic fields around Jupiter gently push small charged particles out of the ring plane. This false color image has been artificially stretched in the vertical direction to highlight the ring halo.