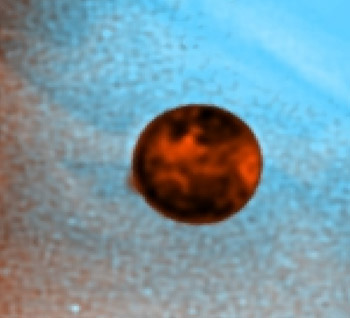 Explanation: There it goes again. Gas and rock were catapulted hundreds of kilometers into space as Jupiter's most volatile moon, Io, showed yet another impressive volcanic display in this just-released photograph by the Hubble Space Telescope. This time the culprit was Pele, a volcano thought previously inactive since photographed by the passing Voyager 1 spacecraft in 1979. The explosion is visible on Io's lower left in this false-color photograph, taken in July 1996. Io's thin atmosphere and low gravity allow volcanic plumes to rise higher than they would on Earth.