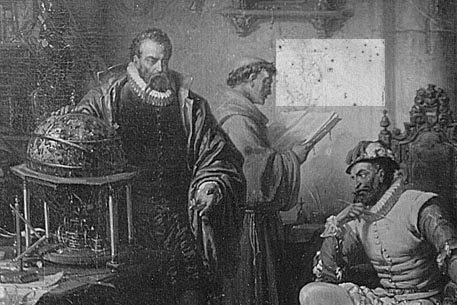 Explanation: The first Astronomy Picture of the Day (APOD) appeared two years ago today. Pictured above is a scene surrounding the creation of an early APOD, depicting the famous astronomer Tycho Brahe demonstrating a celestial globe to Emperor Rudolph II. The image of a possible optical counterpart to a gamma-ray burst appears on the back wall. In Tycho's day, humanity discovered the nature of the Earth and the geometry of the Solar System. The times we live in are even more fascinating as we explore the nature of our Solar System and the geometry of our whole universe. APOD continues to chronicle these events by finding, presenting ,and annotating the most important astronomical pictures of our time, and cataloging them in an indexed and searchable archive. Link to APOD and discover the cosmos! With over five million pages served, we thank NASA, Michigan Tech, USRA, and most of all our readers, for their continued support.