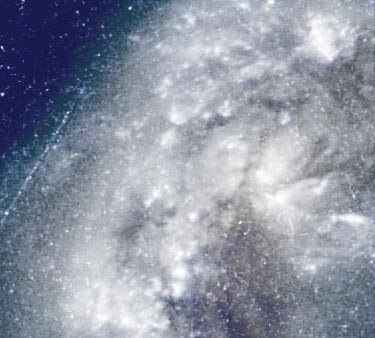 Explanation: This galaxy is having a bad millennium. In fact, the past 100 million years haven't been so good, and probably the next billion or so should be quite tumultuous. NGC 4039 was a normal spiral galaxy, minding its own business, when NGC 4038 crashed into it. The evolving wreckage, known as the "Antennae", is pictured above. As gravity pulls each galaxy apart, clouds of gas slam into each other and bright blue knots are formed. These knots are large clusters of stars imbedded in vast regions of ionized hydrogen gas. The high abundance of relatively dim star clusters is quite unlike our Milky Way's globular cluster system, though. Perhaps some of these young star clusters will go on to form globular clusters, while others will disperse through close gravitational encounters. The above picture is centered around the larger of the two interacting galaxies: NGC 4038. The diagonal streak across the upper left is unrelated to the colliding galaxies. The color contrast in the above three-color mosaic was chosen to highlight extended features.