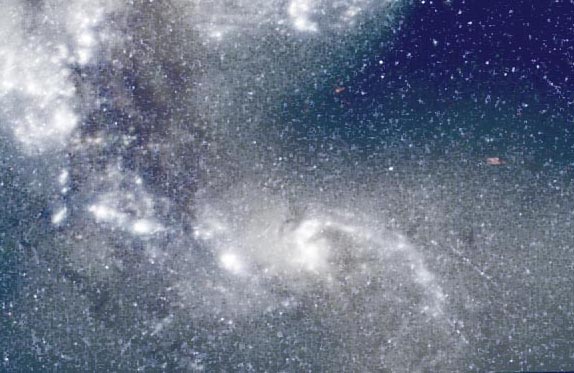 Explanation: Do star clusters form when galaxies collide? Quite possibly, according to Hubble Space Telescope observations of the "Antennae", two galaxies thought to be in the early stages of a collision. As NGC 4038 and NGC 4039 slowly merge, the combined gravity of each pulls the other apart, huge gas clouds collide, and new bright stars and dark dust are dispersed. Many blue knots of stars appear to be newly formed globular clusters. Red star knots are particularly interesting, as they might be globular clusters that have not yet expelled early dust from their system. The above picture is centered around the smaller of the two interacting galaxies: NGC 4039. The color contrast in the above three-color mosaic was chosen to highlight extended features.